Menu
Log in
Register
Install the app
You are using an out of date browser. It may not display this or other websites correctly.
You should upgrade or use an alternative browser.

So, I've become a framer to support my map making venture. I make these internet connected electronic maps which show the current weather conditions for the aviation community. I've learned a bunch, made a bunch of mistakes!

My current issue is that I've ended up with some Optix-ng Heave Matte Finish (P99) panels by Plaskolite for my maps. This was a bit more Matte than the previous panels I was using. The problem is now with this heavy matte finish, if the artwork is not completely flush against the plexiglass, it just does not look very good and fuzzy. The artwork is 3mm PVC, which is direct UV printed on by our printer. My problem is the the rear of the map has a bunch of LEDs and is generally obstructed to put some type of material to keep things flush against the panel.

I've included some photos below of the front and rear of the finished piece.

Any thoughts on how I might be able to better keep the artwork pressed against the plexiglass to keep the image crisp with this Matte panel? I'm almost thinking maybe some type of rod which I could fish though the wires in some areas going from top to bottom? There is a lip on the back of the frame where I could recess in something, but I would then need to put some type of spacers to push on the artwork.

Other general feedback is always welcomed. I'm humble and here to learn. 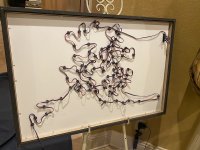 I don't know the price of these new acrylic panels you are using, versus the previous ones you used. Was there a reason you changed to this more matte finish?

If you are looking to press it tighter to the acrylic, you might need a far more rigid back board to help that. Which would then be a problem with your LED lights.

As a quick reply, I would say, change back to whatever you were using before and cut your losses. Unless there was a specific reason that you couldn't use that anymore.
BEST CUSTOM FRAMING IN GLOUCESTER, MA
J

I ordered from the same vendor and I just ended up with different material this time. I'm not sure why it was different, I need to contact them tomorrow, but I ordered a bunch of it..

I’ve emailed them (Polymershapes) to see if we can get the original material snd figure out what was different this time.

I’ve emailed them (Polymershapes) to see if we can get the original material snd figure out what was different this time.

A friend of mine came up with a good idea, where I could just put some picture wire inside the frame and then I can 3d print some "Castle Towers" which would sit under the tensioned wire and push the PVC against the plexiglass. Would just need to install two d-rings on the inside of the frame and use some framing wire tensioned between it.
D

Is there a reason you can't have the maps laminated or finished with a matte sealant? If so there would be no need for acrylic. Backing may need to be moisture resistant and firmer, Diebond, Gaterboard, Aluminum composite---
If you actually make the maps, have them printed on a material such as Diebond.

David -- That is a great point, thanks for mentioning that.

The artwork is already printed directly to the substrate and has a matte like finish. I should consider just doing away with the acrylic completely. I guess I did acrylic because I felt it added something to the final piece. It somehow made it more professional... However, right now all it is adding is hassle.

I design the artwork for the maps and then have them printed at a local printer/sign shop. They use a direct-to-substrate printing process and print directly to 3mm PVC. I'll have to ask what else they can print on. I use the PVC because it is easy to poke the fiber optic holes for the airport locations with an Awl. I don't want material so hard that I need to resort to needing to drill the holes. So it's a bit of a catch-22. The holes are 1.5mm.

Ask for sample pieces, and recommendations with drilling, in the long run I think drilling would be best, cleaner and consistent holes.

Just a thought, If you printed on Aluminum and mounted to a strainer ( 3/4 x 1 1/2 premium pine, Home Depot) painted black, you would have a very durable float look, which is a very popular look now days.
Last edited: Dec 15, 2020

With 3mm PVC and 3mm non-glare acrylic, you are dealing with two flexible surfaces, and tying to force them together would probably only exacerbate the issue. Both are also reactive to environmental changes and will flex toward and away from each other with changes in humidity and temperature.

David's two suggestions are spot on. 3mm ACM (DiBond, etc) with a printable finish might be all you need.
I have seen dye transfer images on ACM panel that are very resilient.
Drilling would give you a more uniform hole to work with as well. Dremel makes a portable drill press that fits their tools to assure the hole is perpendicular to the surface.
"You have to be relatively intelligent to realize how stupid you are" John Cleese